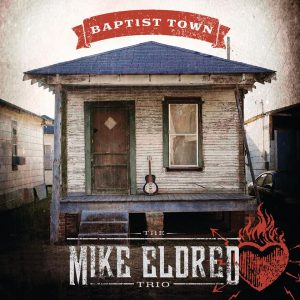 It’s hard to imagine anything of value coming from death. With one blues musician, the “King of the Delta,” the events are blurry as he joined the 27 club on August 16, 1938.

Eric Clapton regarded him as “The most important blues singer that ever lived.” The question remaining is, what good could come from the sudden death of talented, gifted and historical musician, Robert Johnson? One strong possibility is The Mike Eldred Trio’s new album, Baptist Town.

Paying homage to musicians through music happens frequently. But with The Mike Eldred Trio, Baptist Town does more than pay homage to Robert Johnson. Baptist Town brings the past of poverty and racism to present day, showing us that little has changed in parts of America.

With the help of David Hidalgo, Robert Cray, and John Mayer, Baptist Town takes us to the Mississippi Delta. It emphasizes the life and traditions of black America living in the Deep South. With songs such as the title track “Baptist Town,” and the leather strap of “Black Annie,” Eldred talks of a dark period in American history and leads us to a disturbing place, today.

There are many tracks in Baptist Town worth mentioning. “Bess,” my favorite and a tribute to Bessie Smith, is beautifully written. The album, engineered by Grammy Award-winner Matt Ross-Spang, is filled with gospel spiritual pieces such as “Somebody Been Runnin’,” and “You’re Always There.” If I didn’t know better, Eldred composed these song lyrics in the 1920’s. It is an album filled with historical tradition as musicians busked in the streets of the Deep South. As for Robert Johnson, he is “resting in the blues.” I’m J.R. Miller with High Note Reviews, and this is The Mike Eldred Trio singing to Baptist Town.